This article first appeared in the September 2015 issue of Southern Scope, the newsletter of the Southern Association for College Admission Counseling (SACAC). 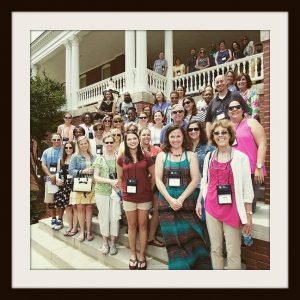 Forty-two hardy school counselors and independent educational consultants led by Caroline Morris and Kate Henderson toured 15 colleges and universities in Georgia as part of the Sweet Tea Tour. The hottest ticket in town, registration for this tour closed out in under 10 minutes!!

With sweet tea the traditional beverage of the South, I focused on one of the traditions at each of the colleges and universities on our tour. On our first stop at Georgia Institute of Technology, tour guides shared the story of The Whistle, modeled after early industrial steam whistles. The Whistle sounds off to end classes and to announce touchdowns scored by the home team at home games. Moving on to our second Oglethorpe University, we learned General James Oglethorpe established a British colony in what is now the state of Georgia. In honor of the general, the school bearing his name hosts the Petrals of Fire Race, a run around the quad with the goal of finishing one lap before the 12th chime of the campus’s bell.

Day 2, we headed southeast stopping at Mercer University where students as first year students and graduating seniors rub the head of the statue of Jesse Mercer, founder of this institution, for good luck. Continuing southeast, about three hours later, we arrived in the charming city of Savannah and the citywide campus of the Savannah School of Art and Design. In keeping with their mission of creating all forms of art, SCAD students participate in the Sidewalk Arts Festival held annually in Forsyth Park where students and faculty generate chalk drawings for the community to admire. 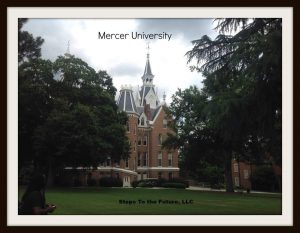 Setting our sights on Georgia Southern University to the northwest, the 3rd day of travel introduced us to the Sweetheart Circle at GSU. Folklore has it that sweethearts will marry if they walk the circle three times together. Moving on northwest, the Midnight Breakfast at Georgia College & State University provides a delicious respite for students the evening before final exams. Faculty and staff serve students a meal and the Campus Activities Board holds multiple events to entertain the students. Our third stop of the day, the University of Georgia, portends bad luck if first year students walk under The Arch, forged out of black iron, before graduation. 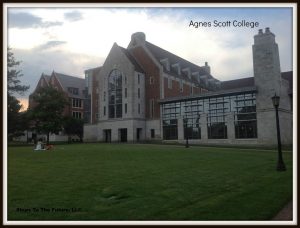 Berry College, approximately 3.5 hours northwest of UGA, celebrates Mountain Day. Honoring the birthday of Martha Berry, the founder of this college, BC also holds it Homecoming event on the same weekend. As an aside, Berry is the largest campus with 27,000 acres, with the United States Air Force Academy coming in second at 18,000 acres. Continuing our 4th day, we headed southeast to Kennesaw State University. A local children’s hospital is the recipient of teddy bears and other stuffed animals tossed onto the basketball court during halftime of the Teddy Bear Toss, an annual tradition. Rounding out the day and still moving southeast, Agnes Scott College’s young women receive a black onyx ring inscribed with ASC during their Sophomore Ring Ceremony, a semi-formal event. 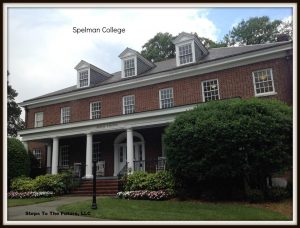 Georgia State University has a large bronze panther statue in Unity Plaza. We learned on Day 5 that rubbing the panther’s nose before exams and sporting events would bring good luck. Wearing white dresses, the young women at Spelman College participate in special events such as the New Student Orientation Induction Ceremony, Class Day, and Commencement. The white dresses signify the dignity and respect for the occasion. One time-honored rite of passage at Morehouse College is the Parents Parting Ceremony. Students and parents share their redefined roles, and then first year students walk through the college’s gates, which close behind them leaving the parents on the other side. Rounding out the day, we headed back to Emory University, our meeting place for the tour. Dooley, the biology lab skeleton, rules over all the traditions at Emory. With the power to dismiss classes, Dooley and his entourage are a welcome sight for students. Embodied by an unknown student, the Spirit of Emory also has a week-long event in the spring in his honor.

Day 6 we learned Dooley originated at Oxford College of Emory, the original Emory campus before it moved to Atlanta in 1919. At Oxford, Dooley usually takes on the role of the “cloaked campus critic”. 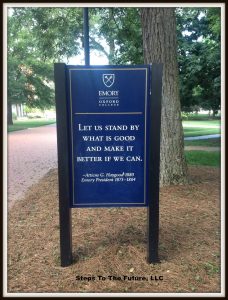 Thank you to each campus for the hospitality, great information, great food, and collegiality showered on us during the Sweet Tea Tour. Many of us are working off the “freshman 15” gained during our week – long adventure. Carolina and Kate, you are the best! Visit the websites of each institution and follow them on social media to learn more about the opportunities awaiting prospective students.